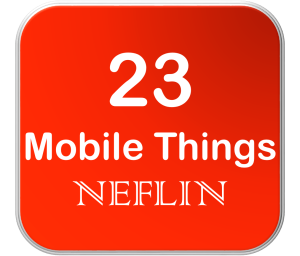 On January 12, 2015 the Northeast Florida Library Information Network (NEFLIN) posted the first mobile thing (app) in their “23 Mobile Things” program.  For the next six months NEFLIN introduced participants to one or more mobile apps each week. Participants learned about the app through text or videos, downloaded the app and experimented with it, and then answered a few questions about it.  NEFLIN awarded Apple or Google gift cards to those who completed all 23 things by June 30, 2015.

The series started with common social media apps such as Facebook, Twitter, Snapchat, and Instagram.  They moved on to audio apps such as Spotify and SoundCloud.  Of course, reading apps were covered including Flipboard, Goodreads, Google Play Books, and iBooks. Video editing, presentation, and even game apps were covered.

The official program has ended, but you can see the list of mobile apps and learn about each one.  Visit 23things.neflin.org/23-things.